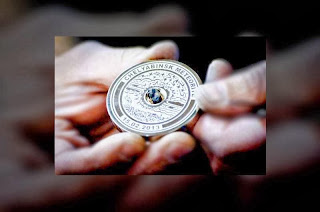 What is better than winning gold at the Olympics?

Winning gold at the Winter Olympic Games in Sochi, Russia on Saturday (Feb. 15) because on that day, and that day alone, earning a gold medal also means being awarded a piece of a rock that fell from space.

Saturday marks exactly one year since a small near-Earth asteroid entered the Earth's atmosphere over Russia and exploded over the Chelyabinsk Oblast (region). Regarded as the most widely witnessed asteroid strike in modern history, the Chelyabinsk meteor was also the largest recorded natural object to have fallen from space since 1908.

Ten of those medals will be presented to those who place gold at the Sochi 2014 Olympics on the anniversary of the Chelyabinsk meteor fall.

In total, 50 of the meteorite-adorned medallions have been minted. In addition to the those that will be awarded to the Olympic committees of those nations whose athletes win gold medals Saturday, one is being given to the regional Chelyabinsk museum, another will stay in Sochi and the remainder will be offered to private collections.