BVN: You Can Now Link Your First Bank Account Online

BVN(Bank Verification Number) activation has been an issue for bank customers ever since CBN made it a mandatory exercise for every account holder.

Earlier, the exercise end date was set to June. On this note, huge numbers of customers trooped in to their bank branches and like soldiers in a war zone, there were uproars in different areas of the country. Customers fighting each other, abusive speech from customers to bank officials and according to some witness count, Some persons collapsed while queuing for activation.

However, it was later postponed by the CBN till October 31st this year in other to permit customers who are yet to register do so. With this, what looked like a war became a nightmare as many retreated for a later day activation and things were back to normal.

One of the major issue of BVN is not just the activation itself, BUT also the LINKING of customers other bank account(s) to an already received BVN.
With this, First Bank Nigeria as its name implies became the first to launch an online BVN linking platform.
This would assist many to link their BVN to their First Bank account at the comfort of their home. 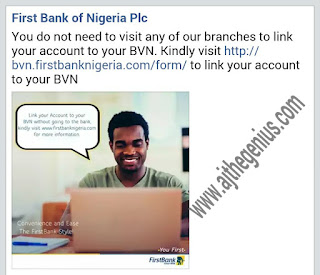 They announced the platform launch via their social media channel earlier today and lots of users accepted it as a welcome idea and hoping that other Banks follow suite.
To link your BVN visit: http://bvn.firstbanknigeria.com/form/