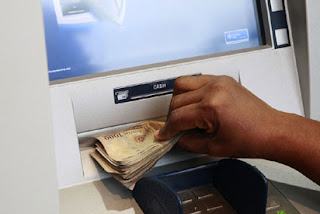 Briefing newsmen after the 322 Bankers’ Committee Meeting in Lagos weekend, Mr. Kolawole Balogun, who represented the Director Banking Supervision Department of the CBN, Tokunbo Martins said “At the meeting we agreed that banks should refund the charges made on customers for withdrawal and deposits in those states that cashless policy has not taken place.”
According to him “ The cashless policy has officially  taken place in five states and federal capital, Abuja. The states are Lagos, Abia, Anambra, Kano, Ogun and Rivers States, as well as the Federal Capital Territory, Abuja.  The CBN has not officially announced the take off implementation of full cashless policy in other states other than the already stated states and federal capital territory, Abuja, due to some infrastructure bottlenecks.

We are allowing ample time for the banks to deploy adequate infrastructure needed to support the cashless policy as well as enable additional sensitization of various bank customers on the merits of the policy. There are telecommunication, power and other problems that are yet to be addressed.” The CBN has introduced a new policy on cash-based transactions which stipulates a ‘cash handling charge’ on daily cash withdrawals or cash deposits that exceed N150,000 for Individuals and N1,000,000 for Corporate bodies.

The new policy on cash-based transactions (withdrawals & deposits) in banks, aims at reducing (not eliminating) the amount of physical cash (coins and notes) circulating in the economy, and encouraging more electronic-based transactions (payments for goods, services, transfers, etc.).
Tokunbo further noted that the CBN will sanction delinquent debtors whose names were published by banks if they refused to negotiate with their banks on how to pay their debts. “The publication of debtors names is ongoing and banks will be doing this on quarterly basis” he added.
Speaking on domiciliary account, Mr. Segun Agbaje, Chief Executive Officer, Guaranty Trust Bank Plc said “said “The restriction on domiciliary account is just the cash deposit. Every other things remain the same.  Payment of school fees, medical treatment etc can be done through the domiciliary account.

Any person or company that need foreign currency can go through the CBN’s window and get whatever it wants provided it is a genuine who cannot meet the official window requirements that can go to parallel market. The essence is to strengthen naira and make Nigeria less import dependent.”