All You Need To Know About Ebola Virus 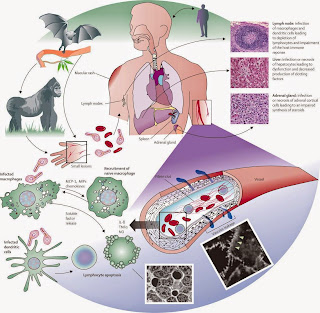 1. It is a Central African disease that has traveled over countries in a living host to West Africa. It is easily spread by physical contact and eating contaminated bush meat. Major hosts are in 5 species of Bats but monkeys and apes are easily infected and killed.
2. It kills in a week, leaving no time to treat an individual.
3. It has no known vaccine or cure
4. Known cases have been experienced recently in Guniea, Liberia and Central Africa Rep, spreading eastwards and westwards towards Nigeria. Death toll so far in West Africa is over 100.
5. The Ebola outbreak of 2014 is the most challenging one witnessed in Africa.
What we can do?
1. Avoid eating any bush meat for now! Especially Apes and Bats.
2. Wash your hands as regularly as possible, especially after shaking a stranger. It is spread by contact.
3.The most straightforward prevention method during Ebola outbreaks is not touching patients, their excretions, and body fluids, or possibly contaminated materials and utensils. Traditional burial rituals, especially those requiring embalming of bodies, should be discouraged or modified. Awareness is key, don't just read or ignore...

Spread this campaign before the virus spreads!

Email ThisBlogThis!Share to TwitterShare to FacebookShare to Pinterest
Labels: health