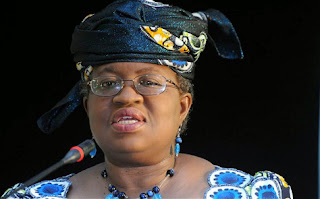 Barely days after being listed by the World Bank amongst the world's five poorest countries, Nigeria has declared a Gross Domestic Product, GDP, of N80.3 trillion ($509.9bn), pushing ahead of South Africa as the continent's biggest economy.

The new figure was announced Sunday by the National Bureau of Statistics after a rebasing that nearly doubled Nigeria's GDP from N42.3 trillion.

The GDP index is the total value of a country's goods and services over a period of time.
Rebasing is carried out to give the most up-to-date picture of an economy as possible. Many countries rebase their GDPs after every few year but Nigeria's was last computed in 1990 when there was limited growth in most economic sectors.

The new figure shrank Nigeria's debt-to-GDP ratio to 11 percent for 2013, against 19 percent in 2012, the Statistician-General, Yemi Kale, said on Sunday.
But many Nigerians and economists believe such numbers do not bring any change to a country with about 70 percent of its population in extreme poverty.

Analysts say the rebasing is to enable the government come up with figures to support claims of the superlative performance of the country's economy, said to be growing at about 6.5 to 7 per cent annually.

But, the pronouncement by the World Bank President appears to have removed the sail from government's wind, as it highlighted the disconnect between government's statistics and economic reality.

The World Bank President, Jim Yong Kim, who was addressing participants at the Council on Foreign Relations, CFR, meeting in New York, named India, China, Bangladesh, and the Democratic Republic of Congo as the other countries in the new global poverty categorization.

"The fact is that two-thirds of the world's extreme poor are concentrated in just five countries – India, China, Nigeria, Bangladesh, and the Democratic Republic of Congo," he said.

"If you add another five countries — Indonesia, Pakistan, Tanzania, Ethiopia, and Kenya – the total grows to 80 percent of the extreme poor."

Mr. Kim, who defined extreme poverty as "people living on less than $1.25 a day", said "more than a billion people in the world live on less than that each day."