Marriages And Businesses Fail For The Same 3 Reasons 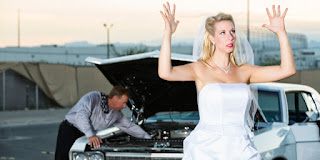 Psychologist Peter Pearson started The Couples Institute with his wife Ellyn in 1984 in Menlo Park, California — the heart of Silicon Valley.

"By and large, businesses and marriages fail for the same three reasons," Pearson says.

NOT LEARNING FROM EXPERIENCE

"[Failing relationships] keep having the same damn problem over and over again, and they don't learn from it," Pearson says.

Similarly, a company that repeatedly falters with recruitment, sales, or shipping product is heading toward a downfall.

You have to acknowledge that there are always going to be issues that come up at work or in a relationship, Pearson says. The key is to adopt a growth mentality, seeing problems as opportunities for growth — and not getting stuck.

NOT ADAPTING TO "DISRUPTION"

Legendary Harvard Business School professor Clay Christensen gave us the term "disruption," which describes how a change of conditions in an industry can destroy or nurture a business — like how widespread broadband internet access allowed Netflix to stream movies and topple Blockbuster.

If you don't adapt to those tectonic shifts in business, you're history — and it's the same with a relationship.

"If you have kids come along," Pearson says, "that's a change in condition."

Children are a "gravitational hole," he says. They change the whole dynamic of a marriage, pulling in energy from either party that used to be spent elsewhere.

"You have to find ways to compensate for that," he says.

Business leaders ask good questions about their future. Danny Meyer, the high-profile head of Union Square Hospitality, likes to ask, "How can we become the company that would put us out of business?"

But while a leadership team might ask how they could get blindsided, the couples that come into Pearson's office rarely make the same inquiries.

Take, for example, your prototypical power couple, both of whom put in long hours at the office. Pearson says that they're not likely to think, "Huh, if we stay on this trajectory, coming home exhausted every night and working through the weekend, I wonder where that might take us in five years?"

That's a major problem. Without thinking about where you're going, you're not going to have a thoughtful outcome. It follows, then, that asking about the trajectory of a relationship is useful in the same way that imagining the future of a business can be.

"Most couples stop thinking critically about their relationships after the honeymoon stage. After they get married they just assume that things will work out," Pearson says. "But it's no different than two people beginning a startup company. No two people would ever begin a startup company thinking, 'Well now that we started it we don't need to talk about it anymore.'"