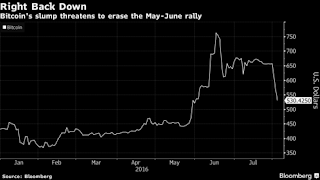 Bitcoin plunged after one of the largest exchanges halted trading because hackers stole about $65 million of the digital currency.
This isn't the first time its happening, MTGox got hacked in 2014 and affected the bitcoin price.
The recent hack made Bitcoin slumped 5.5 percent against the dollar as of 2:30pm on Wednesday in Tokyo, bringing its two-day drop to 13 percent. Prices also sank 6.2 percent on Monday, although it was not clear if that initial move was related to the hack.
Hong Kong-based exchange Bitfinex said Tuesday it halted trading, withdrawals and deposits after discovering the security breach. The exchange said it was still investigating details and cooperating with law enforcement, but acknowledged some bitcoins were stolen from its users.
"Yes -- it is a large breach," Fred Ehrsam, co-founder of Coinbase, a cryptocurrency wallet and trading platform, wrote in an e-mail. "Bitfinex is a large exchange, so it is a significant short term event, although Bitcoin has shown its resiliency to these sorts of events in the past."
Bitfinex confirmed in a message to Bloomberg News on Wednesday that the hackers took 119,756 bitcoin, or about $65 million at current prices. While trading was halted in all digital currencies, including ethereum, the exchange said losses were limited only to bitcoin. It also said U.S. dollar deposits were not impacted.
Bitfinex Investigating
"We will look at various options to address customer losses later in the investigation," Bitfinex wrote in a blog post. "We ask for the community's patience as we unravel the causes and consequences of this breach."
The Hong Kong exchange was the largest for U.S. dollar-denominated transactions over the past month, according to bitcoincharts.com. Chinese exchange OKCoin was the largest overall bourse for trading in the digital currency, over 90 percent of which is denominated in the Chinese yuan.
More than $1.5 billion has been wiped from bitcoin's market capitalization this week, according to research from CoinDesk.
Mt. Gox Incident
The price drop was reminiscent of the market reaction after Tokyo-based Mt. Gox -- then the largest bitcoin exchange in the world -- disclosed it was hacked in February 2014 and filed for bankruptcy weeks later. Bitcoin prices plunged 30 percent that month.
Bitfinex last year announced a partnership with Palo Alto-based BitGo, which uses multiple-signature security to store user deposits online, allowing for faster confirmation and withdrawals. Exchanges including OKCoin tend to store the majority of deposits offline, while keeping a small percentage online and available for immediate withdrawal.
"Since we now enforce multi-institutional second factor authentication (Bitfinex will be the first factor and BitGo the second factor), attackers are required to compromise both institutions before getting funds," Bitfinex wrote on its support page after the partnership was announced.
BitGo said it is investigating the matter also and hasn't discovered breaches on its side.
"To date, BitGo's investigation has found no evidence of any compromise of its servers or services," company spokesman Joe Volat said in an email to Bloomberg. "We believe that multi-sig security technology on which BitGo's systems are based was not affected."
The company also supplies security to other bitcoin exchanges.
"Bitfinex is in lockdown/investigation mode, so we're not going to know anything for sure for a few days," Peter Todd, an active bitcoin code contributor based in Toronto, wrote in an e-mail.
Culled from Bloomberg