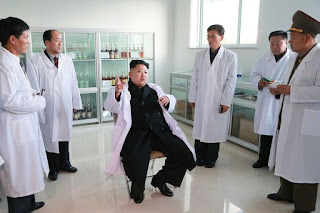 SEOUL, South Korea (AP) — North Korea says it has succeeded where the greatest minds in science have failed.
The authoritarian, impoverished nation better known for pursuing a nuclear program despite global criticism announced Friday it has a drug can prevent and cure MERS, Ebola, SARS and AIDS.
The secretive state did not provide proof, and the claim is likely to provoke widespread skepticism.
The official Korean Central News Agency said scientists developed Kumdang-2 from ginseng grown from fertilizer mixed with rare-earth elements. According to the pro-North Korea website Minjok Tongshin, the drug was originally produced in 1996.
"Malicious virus infections like SARS, Ebola and MERS are diseases that are related to immune systems, so they can be easily treated by Kumdang-2 injection drug, which is a strong immune reviver," KCNA said.
North Korea shut out foreign tourists for half a year with some of the world's strictest Ebola controls, even though no cases of the disease were reported anywhere near the country, before lifting the restrictions earlier this year.
It is believed to be struggling to combat diseases such as tuberculosis, and respiratory infections are among its most common causes of death, according to the World Health Organization.
North Korea trumpeted the same drug during deadly bird flu outbreaks in 2006 and 2013.
The North's claim comes as rival South Korea fights an outbreak of MERS that has killed two dozen people and sickened more than 160 since last month. There is no vaccine for the disease.