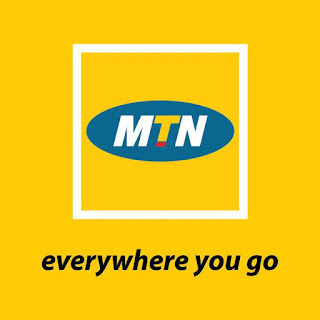 Some days back I called on someone to get me a recharge voucher as QuickTeller failed to top up my device even after deducting my cash.
However I needed to renew one of my subscription service, so i had to buzz someone to get me a physical card.
She sent me the code via an SMS and to my surprise it was a 16digits code.
I was confused and concluded this is some Airtel card mistaken for MTN. (Since Airtel has 16digits pin)
So I called her up and told her she sent me a wrong card, but she insisted it was an MTN card.
I proceeded in topping up my device with it, but didn't go through, perhaps the doubt made me miss a digit or 2 while typing.
So I called her up again and told her it wasn't going through and I needed another card, "this time a 12 digits please"
But to my surprise I got a transfer of the said amount not quite long from her. She told me she loaded the card and transferred to me.
A little bit skeptical at the time and never bothered, until I saw a post from MTN: 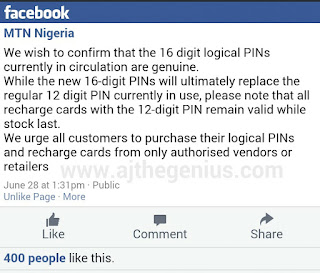 Thanking God I wasn't too forward speaking to her about unrealistic the scenario was, because no news outlet posted about the update till now and just had to post it so others can be aware of this and not to go saying someone gave them a fake card.
By the way, Here are some reactions from users, putting in mind the stress it takes to type a 12 digits voucher code, talkless of a 16digits pin. 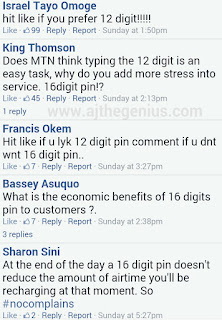