Fast Food Workers in the US to Earn over N.5million Per Month Minimum Wage 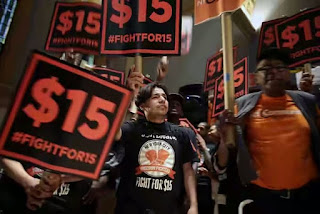 A state panel recommended the minimum wage for fast-food employees be raised to $15 an hour, bypassing the state Legislature. (Which in Nigerian currency is about N2,850 per hour, N19,950 per 7hours of daily work and N598,500 per month using a N190/$ exchange rate)

University of California President Janet Napolitano announced that the minimum wage for direct and contract employees in the U.C. system working 20 hours or more per week will be raised to $15 an hour over the next three years. The first hike will be to $13 an hour on Oct. 1, 2015. The minimum wage will then jump to $14 a year later, and hit $15 an hour on Oct. 1, 2017.
In a statement, Napolitano said,
"... our community does not exist in a vacuum. How we support our workers and their families impacts Californians who might never set foot on one of our campuses."
She continued, "This is the right thing to do — for our workers and their families, for our mission and values, and to enhance UC's leadership role by becoming the first public university in the United States to voluntarily establish a minimum wage of 15 dollars."

The move is expected to affect 3,200 workers in the university system, according to a U.C. spokesperson. The plan will also institute stronger oversight of contract employees. Spokesperson Dianne Klein told NPR that officials found some contract employees weren't being paid adequately. "Contractors or subcontractors have been paid less than minimum wage, [and] workers have operated in poor conditions."

On the other side of the country, a state panel in New York recommended the minimum wage for fast-food chain restaurant employees be raised to $15 an hour. The Fast Food Wage Board, appointed by Gov. Andrew Cuomo, passed a motion to raise the wage in a 3-0 vote, with gradual increases until July 1, 2021, when the full hike would be implemented. State Labor Commissioner Mario J. Musolino can accept, reject or modify the board's recommendation.

Bloomberg reports the panel was convened by Cuomo to bypass Republicans in the state Senate, who have fought previous initiatives to raise the minimum wage.
The New York State Restaurant Association told Bloomberg that raising wages one sector at a time is wrong.
"From day one Governor Cuomo's wage board has sought to silence the business community and force through an unfair and discriminatory increase on a single sector of one industry," [Melissa] Fleischut said in a statement emailed Wednesday. "The result is an extremist policy that will force business owners in this low profit margin industry to cut hours, lay off employees and use technology to help offset skyrocketing labor costs."

In a statement to NPR, Bill Lipton, director of New York's Working Families Party, which pushed heavily for the wage hike, said: "Two and a half years ago, $15 was considered a crazy dream — now it's close to becoming reality for over 180,000 working families. Hopefully, not too long from now, we'll look back with amazement that we as a society ever allowed corporations in any industry to force millions to work full-time yet still live in poverty. "

And in a third major move on the minimum wage Wednesday, Washington, D.C.'s Board of Elections approved language on an initiative that, if approved, would raise the minimum wage in the District to $15 an hour by 2020. The Associated Press reports supporters will have to gather about 23,000 signatures to get it on the ballot next year. Currently, D.C.'s minimum wage is $10.50 an hour.